The next-generation of javascript also known as ECMAScript 6 (also called ES6 or Harmony), is bringing us lots of amazing features that you probably will need to know. But instead of you spend too much time learning and researching all of the features I separated a few that I felt are the ones you’ll be probably using in your daily basis.

Don’t worry if you are new to javascript or you’re coming from a server-side language, I believe this is the best time to learn it as ES6 has a much cleaner and friendlier syntax, known as sugar syntax.

First of all, Syntactic Sugar is a syntax that make a language easier to understand and more readable, it makes the language “sweeter” for us. It also means that some “new” features of ES6 are not really new because ES6 is trying to simplify the syntax to make things easier for us. So instead of writing the your code using the old tricky way, you’ll be able to code in a the simpler way, with sugar syntax.

Look below the sugar syntax in action to create a class in Javascript. 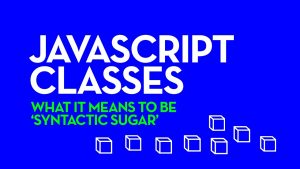 Always remember: Javascript does not support classes like other Object-Oriented languages. Instead, Javascript can simulate classes using functions and prototype.

Below is the new syntax to create classes. You will feel familiar to this way if you come from a Java background or other OO language.

All the methods you declare in a class will be added to the prototype of the class. 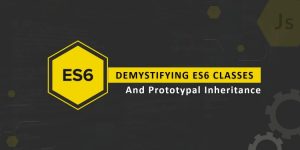 Inheritance in ES6 and Prototype:

Yes, inheritance in javascript is possible via prototype. If you’re not familiar with prototype, the good news is that with ES6 you don’t necessarily need to know it to get the benefits of classes and inheritance. prototype is not hard to learn but for the purpose of this post you can understand prototype as the way javascript implements inheritance.

This is how I would create a subclass of Project, called WebProject and inherit the attributes and methods from Project.

If you don’t want to leave all of your javascript in just one file or you do want to re-use some functionality in other parts of your application, you’ll probably want to use modules. The magic keyword you need remember is export. Use export before the function you want to expose and you’re done.

This is the structure of our app. The Project and the WebProject classes are stored in application.js.

Let’s separate out the arrayToString() function from the application.js and put it into the module modules/helpers.js, so we can re-use it in other places.

Now we just need to import our module in application.js:

What else should I know about ES6?

Well, the next two feature in ES6 are very interesting. Enter let and const. They will make the development easier and even avoid common mistakes in Javascript.

To understand let, first we need to keep in mind that var creates function-scoped variables:

So the function above can be better understood like this:

Now, how does let work?
Let’s modify the same example and introduce let in it.

As let is inside a block, name is only seen inside that block.

In this case, as let is referencing a previously declared variable, the value “Rafael” is valid only inside the block. Outside the block the value of name is “Hey”.

The ability to create constant variables is something javascript was missing for a long time. With ES6 you’ll be able to create constants and make sure its value won’t be changed during the application execution.

ECMAScript 6 also brings these amazing features you might want to take a look: Map, WeakMap, generators and Proxies.

When will I be able to use ES6?

At the moment Firefox is the browser that has implemented more features. Juriy Zaytsev has put together some a useful table of compatibility for the major browsers. http://kangax.github.com/es5-compat-table/es6/

Some ES6 features is also available in Node JS. Check out Alex Young’s blog post on ES6 for Node to get started.

The next-generation of javascript will bring a simpler and friendlier syntax helping the learning process for developers coming from other OO languages. The main problem I see now is that it’s gonna take some time until we can use ES6 extensively in all major browsers.

Now, for server side development using Nodejs, ES6 is already a reality as many features are already present in V8.